It’s an exciting time at Splash Swim School and in the world of swimming! We are opening our new, Splash Walnut Creek facility soon, and enrollments will open shortly.

Excitement is also building for the summer Olympics with the USA swimming team trials well underway. We thought we’d share some stories and upcoming events of interest.

This article covers some of the local athletes as they’ve been preparing for the Olympic trials while renting a 5,000 square foot in the Oakland hills. It features freestyle sprinters Nathan Adrian, Will Copeland and Graeme Moore, and breaststroke sprinter Sean Mahoney. Moore has secured up a berth on the South African team while the Americans are training for the Olympic trials currently underway. Check out their story on SFGate.

Coaching for Cal and country is a story about Teri McKeever, the first woman head coach of a U.S. Olympic swim team. McKeever has coached 17 Olympic athletes during her two-decade tenure in Berkeley. Now, she has the opportunity to lead the U.S. Olympic women’s swimming team to victory in the 2012 London Games!

“Teri was an awesome coach to swim for,” says Splash Director, Liz Claytor. “She has a gift for getting her athletes to their fullest potential, and she actively seeks ways to keep training as fresh and fun as possible. She deserves this recognition, and I am so proud to say that she was my coach!” 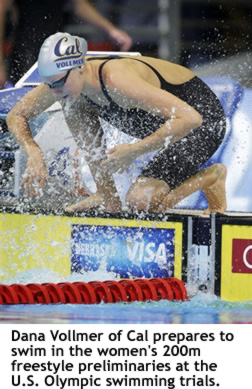 NBC is covering the Olympic trials and games this year. Get the latest Olympic swimming photos, videos, results, track the athletes, and access schedules here.

Last Friday, a friend emailed: “If Cal was a country we’d be 11th in the medal count!” And, if we include Bay Area athletes in the tally the…